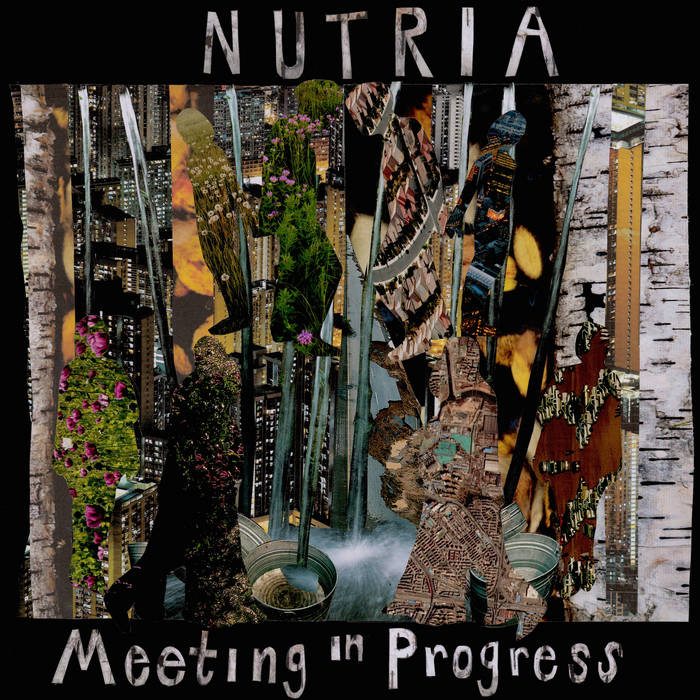 "Meeting In Progress" is the third release by New Orleans trio Nutria, and to date, it is the fullest realization of the band’s compositional and improvisational voice. Band members Byron Asher (tenor saxophone and clarinets), Trey Boudreaux (bass) and Shawn Myers (drums) began playing together in 2014, and over the last five years, they have developed the truly collective aesthetic on display here. While each composition on this album was conceived alone by an individual, the writing is reflective of the members’ long-standing relationships, taking into account musical strengths across the group and pushing and pulling each other towards an ensemble sound. It is evident on this recording that this is, above all, a band project.

The album title riffs on the relationship of the three members and their close knit history. Though it is their third release, they feel they have hit their stride with it. These are no longer the infant stages of a project, nor is it the end. It is one of many stops on their progression as a band, each stronger than the last. This recording captures the band as they are as individuals: young professionals with strongly developed aesthetic senses who are still growing and stretching.

To that end, the first composition on the album, Asher’s title track, is made up of three parts that demonstrate the band’s ability to deftly navigate shared leadership responsibilities. It begins with Asher leading a guided but largely collectively improvised introduction. The rubato incantation serves as an entryway to the collective ethic of the entire album. This elides into a dense, odd-meter melody section driven by a pizzicato bass ostinato from Boudreaux that exploits the natural harmonic capabilities of his instrument. Myers takes the helm with the third section, pushing the band with a dancing high-hat pattern straight out of the club.

Boudreaux’s "The Mission" is a rhythmically dense but melodically and harmonically subdued statement on moving through life with forwarding propulsion and not lingering too long on the past, another apt metaphor for the general development of the band. The piece is centered around an oblong groove separated by melody statements that never simply repeat but always elaborate on the previous statement. We never mourn the passing of the previous section; we only keep moving forward.

Myers’ "Forth" has similar propulsion, though the insistent dance groove here continues nearly uninterrupted underneath the bass and saxophone counterpoint. The highlight of this track is Myers’ explosive drum solo over an odd-meter loop that showcases his ability to play across the bar and outside the meter while never faltering on the groove of the rest of the tune.

Three tracks on this album are written for natural geographic locations. Myer’s "Lake Solitude" borrows its title from an isolated mountain lake in Wyoming that can only be accessed by foot. The simple bass and saxophone parts lock into a 4 over 3 groove that is West African in nature, but the mournful melody immediately transports the listener to this majestic but lonely location.

Over the past few years, Asher’s compositional development has been supported by individual artist residencies, and "Meeting In Progress" has benefited from them. "Monadnock" was written at the prestigious MacDowell Colony in southern New Hampshire and is named after the highest mountain peak in that region, Mt. Monadnock. Its triumphant final melody section soars to the heights of that mountain while the rest of the composition reflects the chill of the north woods. "Tremont, ME," which features delicate clarinet work by Asher, was written at Barn Arts, a residency space in the town of Tremont, Maine, on rocky Mount Desert Island. Working in a 100-year-old barn overlooking a protected tidal inlet off Bass Harbor, this ballad was written in response to the dramatic tidal shifts on that part of the Atlantic coast.

Asher loosely based "Once Annual Elegy" on the New Orleans funeral dirge, but it’s mostly a study in trio textures. The only piece to feature bass clarinet, Asher and Boudreaux seamlessly swap bassline responsibilities throughout while Myers moves from expressive cymbal playing under an assertive bass clarinet solo to a Wu-Tang inspired hip-hop groove under an unhinged bass solo.

Boudreaux’s "Making Time" is the simplest, most song-like contribution to the record and acts as a palette cleanser for the density explored before and after. The straightforward backbeat orientation, however, affords space for the band to play with the arrangement, most notably in the brief solo section that features Asher and Boudreaux trading melodic phrases to great effect.

Bandcamp Daily  your guide to the world of Bandcamp